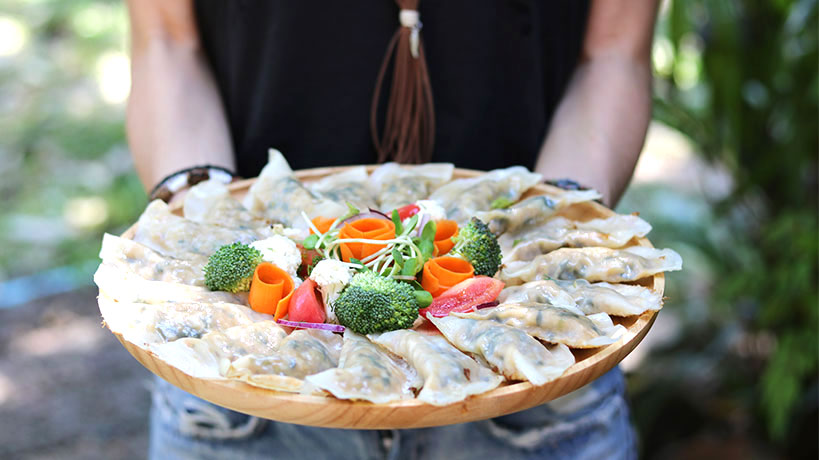 Happy Chinese Year 2018, loves! Today’s recipe is inspired by one of the most popular traditional Chinese dishes. Dumplings… oh, yeah! To be honest, ever since our epic family Southeast Asia travel adventure begun, we’ve become completely addicted to these delicious, versatile little gems. In fact, dumplings are a popular dish in every country in Southeast Asia we have visited so far. Of course, we eat the vegan version of the traditional dumplings. We’ve experimented with lots of different flavors so far, but these hearty, flavorful and protein-packed Spinach & Chickpea Dumplings are at the top of the list : ) The recipe is easy to make and the result is just fantastic!

1. Heat the coconut oil over medium high heat. Add all spices except the nutritional yeast.
2. Chop the onion finely and sauté.
3. Add 1/4 cup of water, bring to boil and add the (well washed!) chopped spinach.
4. Stir until tender. Add the pre-cooked crushed chickpeas, season with freshly squeezed lime juice and add the nutritional yeast.
5. Stir occasionally for about 1 minute. Voilà, our delicious vegan dumpling filling is ready.
6. Now, let’s fill the dumplings! Take a dumpling wrapper, spoon 1 teaspoon of the filling into the center and moisten the outer edge of the wrapper. Fold the spinach & chickpea dumpling in half and press the edges together to seal in the filling.
7. In a skillet add the coconut oil and 50 ml water. Once the water boils, arrange the dumplings in the skillet, cover and cook. After 2-3 minutes the water is absorbed by the dumplings and the bottoms are well browned.
8. Serve warm with your favorite vegan sauce or spread.

Enjoy these healthy, hearty and crazy delicious Spinach & Chickpea Dumplings in the company of good friends : )

Happy September, loves! I hope you had a great start of this wonderful month. Summer is still here, but it already smells like autumn… To be honest, every year at this time, I feel so nostalgic about the end of the summer. But, not this time : ) I’m so thrilled that in a month […]

Hey, guys! I’m so happy to inspire you with this incredibly beautiful RAINBOW vegan recipe : ) Baked sweet potato wedges with tahini sauce, avocado spread and plenty of yummy colorful veggies. Simple, healthy and crazy delicious comfort food for the whole family! And the perfect kid-friendly lunch, snack or dinner : ) In fact, is there anyone who doesn’t […]

Hello, dear friends : ) Today inspiration is the delicious homemade hummus! This heart-healthy chickpea dip is one of our favorite comfort foods at home. Perfect for a simple snack, lunch or dinner. We usually combine it with freshly baked sourdough bread and tons of fresh veggies… Mmm, it’s sooo amazingly tasty! As you may already know, the traditional hummus originates from the Middle East. It […]